I’ve been wanting to make a Pavlova for ever. I’ve just always thought it looked like it would be so time consuming and being a mom of two small children, I just couldn’t see having the time (or patience). That was until just a few days ago. I bought two pounds of strawberries and decided I was going to give it a try. I can’t believe I haven’t made one sooner. They really are simple to put together. The most time consuming part was waiting for the meringue to bake for an hour or so. Though that wasn’t a problem. It gave me time to do other things while it baked.

Australians love to say they were the first to make this dessert while New Zealanders love to say it was their creation. I won’t be getting involved in that argument but I can see why they are so keen on claiming it. It’s an easy dessert to make and once it’s made, it looks like a lot more effort went into it’s creation. For my Pavlova, I went with Nigella Lawson’s recipe for Strawberry Pavlova. I made the recipe exactly as it was posted. After putting the meringue in the oven to bake, I read the comments section and many people commented on the oven temperature that the recipe calls for. Nigella starts her oven off at 350 degrees F. Then she lowers it to 300 degrees F once the meringue is put in the oven. She continues to bake it for one hour and 15 minutes, cooling it in the oven once it’s done baking. Most people complained that the starting temperature was way too high and that it would cause the meringue to brown too quickly and crack. Apparently if you have the oven too hot, it cracks your meringue. So, I decided to cook mine for little less than an hour because of my oven temperature and after it was cooled, I could see that it did crack. The Pavlova still came out tasty it just didn’t look as pretty as it could have without any cracks.

I spoke with my good friend, Amy Fingerhut, who is a professionally trained pastry chef, and the owner of Fingerhut Cakes & Pastry’s, about the differing oven temperatures. She explained that different ovens require different oven temperatures especially if it’s a gas oven vs. an electric oven. So, since Nigella doesn’t say what type of oven she’s using in her recipe posting, there’s really no way to know why she set the temperature so high in the beginning. Amy stated that she generally bakes her meringues at 250 degrees F for about an hour and a half. Once the meringue is done, it should no longer be shiny and it should sound hollow when tapped on. Always make sure to turn the oven off and keep it in the oven while cooling. I have a dual convection/electric oven so next time I make a meringue of any sort, I will cook mine at 250 degrees F without convection. Anyway, here’s the recipe as posted by Nigella Lawson. It really is a tasty dessert. Try it and see what you think! 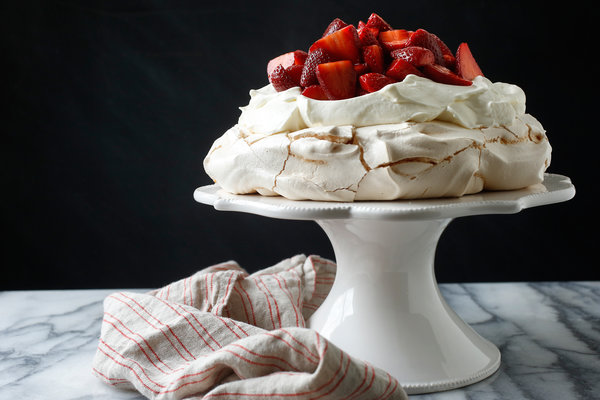 (Photo by Craig Lee for the New York Times)

The particular joy of this dreamy dessert, which was named in honor of the Russian ballerina, is that the meringue base can be made in advance. Then to serve it, drizzle the strawberries with a little balsamic vinegar and vanilla (a combination that brings out the fullest essential flavor of the fruit), whip some cream and arrange it all on a plate. It’s magnificent, and deliriously easy.

Featured in: In A Tyranny Of Children, The Cook Can Be King.