Summer is here and it always makes me think of s’mores and campfires. I love almost anything s’mores, so when I came across a s’mores pop recipe, I was all about it. Though, after talking to my girlfriend, Maren, she wondered if I could make them boozy for a girls day at the pool. What?! The challenge was on.

So I went out and got the ingredients. I figured, if I was gonna make them boozy, the best option would probably be whipped cream vodka, so I made sure to grab a bottle of that too. Once I got home, I set about making them. I mixed the marshmallow cream together and added one quarter cup of vodka to the mix and then set it aside to melt the chocolate and make the graham cracker crumb layer. I didn’t want to add too much vodka to the marshmallow mix because alcohol doesn’t really freeze and you if add too much, the pops won’t really set up.

These s’mores pops are very simple to make, but they are a little time consuming because you have to layer the marshmallow mix, melted chocolate and graham cracker crumbs into the Popsicle mold or cup. I used small bathroom cups that I found in the paper product aisle at the grocery store. I do have Popsicle molds, but mine are in the shape of little rockets because I have kids. Also, I didn’t think they would come out of the mold as easy as they would a cup. The cups were a great success. Perfect size and you just tear them off. So easy! 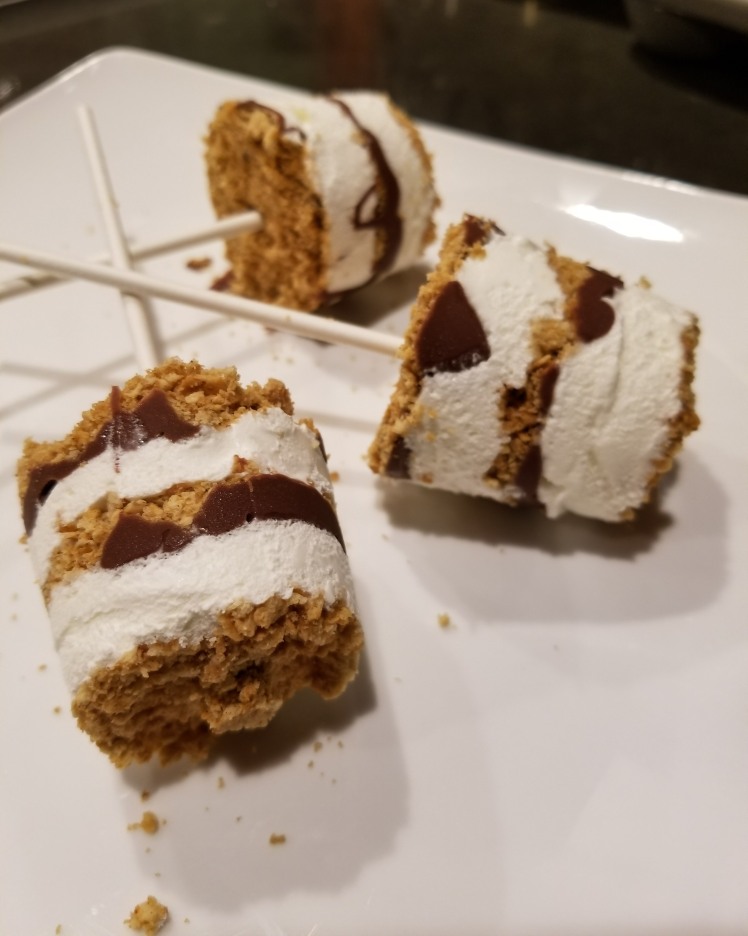 I had to let them set in the freezer for at least five ours, so I let them set overnight. This evening I pulled one out and gave it a try. It was perfect! I had Bill try it and he smiled and said, “Wow, those are good.” He didn’t even realize that there was alcohol in them, so make sure to keep them up and away from the kids. You can always make them non alcoholic as well by just omitting the alcohol from the marshmallow mix. Then the whole family can enjoy them and they really are reminiscent of actual s’mores.

Melt chocolate chips in a double boiler or microwave. Set aside. In a food processor, blend graham crackers and 2 tablespoons of melted butter until well combined. Set aside. In a medium bowl, add whipping cream, cool whip, sugar, whipped cream vodka, and two handfuls of mini marshmallows. Set aside.

Repeat until you fill the Popsicle molds or cups. Insert Popsicle stick and freeze for at least 5 hours or overnight. To remove from mold, dip the frozen pop in water for a few seconds until it’s released. If using a paper cup, just tear it off.

Note: This recipe makes a lot of pops. I made 12 and still had almost half a bowl of the marshmallow cream left. I just stored it in the fridge to make more later, though make sure to use it within a couple of days.